OECD publishes (my) paper on Fibre

The OECD has published a paper titled "DEVELOPMENTS IN FIBRE TECHNOLOGIES AND INVESTMENT". Technicaly it's an OECD paper and it represents what the OECD finds important, but I spent two months in Paris (dec 2006-jan2007) writing it, so emotionally it's my paper. It was really great that my previous employer assigned me to the OECD for that period. The people at the Directorate for Science, Technology and Industry - Information and Communications Policy are great people and I had great fun working with them. These are the same people who make the infamous OECD Broadband Statistics, which are every time cause for discussion in the countries that are ranked low.

The paper examines developments in broadband technology, going from submarine, wireless, to hybrid (BPL, xDSL and Docsis) and all-fibre networks like (xPON and Point to Point). (Submarine is included because it both shows where the technology will go and the difficulties businesses may face) It describes the relative differences and the effects this has on the way these networks can be used. In one of the figures it shows the difference between the bandwidth on a dedicated link (like VDSL) and a shared link (wimax or Docsis) available to one user and to twenty simultaneous users. The paper is already a year old, so LTE isn't included. Service-wise it works from the idea that users need at least 50Mbit/s downstream capacity in order to be able to freely choose services from a variety of service providers and to be able to run several services parallel. 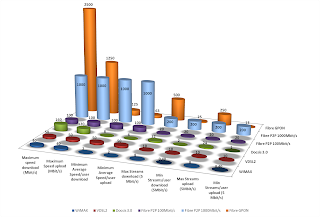 It also discusses the business case there are for investment in fibre networks and the different positions between incumbents and new entrants. Furthermore there is an evaluation of the possibilities for alternative financing models. It also shows a financial model based on a model for the Dutch Ministry of Economic Affairs. This model developed by Arcadis in the Netherlands is based on real investments in The Netherlands and therefore is quite accurate. When applying it to other countries your mileage may vary. What it does show is that housing density matters as well as penetration. What is also clear is that there is not much room for multiple providers of physical infrastructure in the same region.

The last part goes into the role of the government as a stimulator, regulator and investor. Some of the things it argues is that first governments should have an idea of what they want to achieve. Second it argues that governments should take away any barriers to entry, but also must be aware that if they stimulate one party that this interferes with competition for others. So if governments stimulate the roll out of a network, they should demand that the network that they have stimulated becomes open to others under equal conditions.

As an investor governments should be cautious and determine the amount of market failure. If they do invest it should be limited starting with i and then if more is necessary moving up to iv.

i) Digging trenches and laying ducts, removing a significant part of the costs of rolling out a
network.
ii) Providing passive network infrastructure to which network providers can connect their active
infrastructure.
iii) Providing an active network over which others can provide their services.
iv) Providing services over the network to end-users.

All in all it was great fun writing this piece. Another paper was also published called: PUBLIC RIGHTS OF WAY FOR FIBRE DEPLOYMENT TO THE HOME There is a conference in Stavanger next week that will delve much deeper into this topic. I will be speaking there too.
Posted by Rudolf van der Berg at 16:34