I won the Mini-MBA at Nijenrode

Thanks all for voting for me in the FD Career Challenge. (see the previous post for more info). There are 49 other winners and these will compete next week Friday and Saturday in the Mini-MBA for the full MBA at Nijenrode. I didn't get the most votes, but that didn't matter as the essays of Challenge 2 were the most important. I do like the profile you guys painted of me as according to you I am honest, pragmatic, intelligent, enthusiastic, clear, visionary, communicative, analytical, gutsy.

Update I didn't win the Full MBA, but I had a blast this weekend. Thanks to Nijenrode, FD and Linkedin for a great experience.
Posted by Rudolf van der Berg at 12:18 No comments:

Help me win an MBA and vote for me

I'm participating in the FD Career Challenge, by the Dutch Financial Times. I could win a 2 day mini MBA and a full executive MBA. The idea is that the world needs new leaders in this time of economic crisis as the old ones clearly have failed. The challenges until now were selecting the leaders you like and a 300 word essay on "where do you lead". The last bit is a popularity challenge (or as they say, whether I can rally my network). So here it is, my appeal to you to vote for me and choose five traits you like about me. It's in Dutch, but just choose the words you seem to recognize. After you have voted, you will receive an e-mail where you need to click a link with "bevestigen" in it. This confirms you are not a automated script. :-) 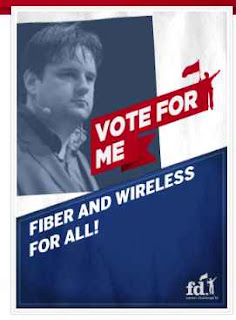 I went with this poster and slogan, I bet that many of you think that this is what every leader in the telecom industry should want:  Ubiquitous Fiber and Wireless connectivity for all along the lines of my party programme: "How to be the greatest ISP". :-)

Please follow the link and select the traits you find best fitting me :-) BTW the picture is by Duncan Davidson
Posted by Rudolf van der Berg at 11:01 No comments:

Longer version of what Google can learn from Europe

The longer version is available on Ars Technica. Also have a look at the comments, but wear some asbestos.
Posted by Rudolf van der Berg at 13:43 1 comment:

Google FTTH: Lessons to be learned from Europe

(Update 14-2-2010, Google isn't planning to offer voice or video according to Minnie Ingersol of Google) Google is going to offer 1 Gbps FTTH. Most of you know that so I won't spend too much time on it. What I want to focus on is what Google can learn from FTTH projects in the EU.

Where should they locate their test site
The towns with the highest penetration on roll out seem to be smaller, more tight knit communities. Smaller towns, up to 10.000 families, in The Netherlands have been more successful in organizing their town to deliver the 40% minimal sign up before Reggefiber would enter the town. The town of Nuenen in the Netherlands reached and FTTH penetration of over 90% in the first year, but that was by giving the service away for free in the future.

When it comes Fiber to the Business/Institute, I've noticed that a region of smaller and larger towns that are at not too big a distance of eachother, are best for creating local cooperation. Municipal governments, SME's, schools all benefit from cooperation with similar organisations who are located in another town. Somehow this cooperation doesn't work that well within just one town. I don't really know why, but it might be that the organisations in different towns are different enough to allow for innovative ideas to flow. Whereas the ones in one town are all of a similar gene pool and that just leads to inbreeding.

How should they promote their offer 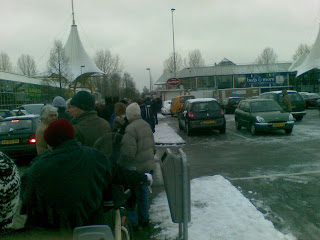 What we have learned here in The Netherlands is that small and very local promotion works best. On New Years Eve, the people of FTTH-provider XMS were handing out free warm chocolate milk at one of the places where fireworks were sold. (They should have stood next to the cart selling "oliebollen", Dutch New Years Eve donuts. I stood in line for 1 hour) In Nuenen and Zeewolde people received a plant pin they could put in their front yard to signify that they had signed up. Nuenen worked together with local organisations, like the soccer club, which is often the focal point of the local community. In the US, it might be working with High School Football teams.Local Radio and Television are also good allies to have. They might also benefit from the network, being able to put HD video on the net for local consumption 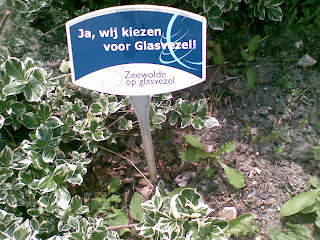 What also helps is to have a local shop/office where people can come, receive a demonstration, receive support and where they can be informed. Centrally located in a mall or in the city center is probably best. In Almere we now have Glashart shops. Here KPN and XMS present themselves to their prospective customers. How to perform the installation
I really suggest Google gets on the phone with Schuuring here in The Netherlands. Their Fiber4All business is the one that installed the fiber into my home. One of the things I learned from them when I received a tour from their director was that it is important to have all the representatives of all the civil works and installation companies in the same building. When something went wrong the various sub-contractors were only a knock on the door away from the project-manager and each other.

What they also taught their personnel is to photograph anything that may lead to a possible complaint of the customer, telling the customer they had done so and writing a form to have it fixed. There is a lot of potential to break stuff. Staff with the right personal skills training can really make and break an install.

What to offer
I really, really hope Google doesn't just offer 1Gbit/s and that's all. I hope they aim to offer a triple play package in line with my article on the greatest ISP in the World. Integrated Google Voice is a minimum, but some other options I would like to see Google offer are:

Some other things Google could help out with are offers to for instance the local sports teams to have some digital camera's next to the field for real time streaming and later viewing  for training purposes. I know some Dutch field hockey teams at amateur level are using Youtube already to store their training movies. They  are looking into how to have online streaming access to their games and practice sessions, both for promotion and for training purposes.

Other practical things
Please Google get the pricing right. A maximum of 50 dollars should be enough for a full triple play package. Also get a good helpdesk. Have a local helpdesk with local people who are proud of working for Google. (Give them a Google Nexus One to start with) Make sure these people actively read online support forums and proactively engage with customers who are complaining online. Image is everything.

Financing
I haven't heard anyone on the financing of this project, but it seems that this could all be pretty much self financing for Google. If done right the network can be sold with all the customers in ten years. Given an average sale price of 1000 dollars per sub for many networks, Google should be able to recover all it's investment in the network.
Posted by Rudolf van der Berg at 16:14 1 comment: