Fiber to my Home, the installation in home

Today fiber was installed in my home. You've seen the previous installments how fiber was just outside my front door. Today the last meter was bridged. This was done by a company called Schuuring. They apparantely are looking for more people to help out.  Two people came. One made sure that the fiber got from the front door to the utilities closet. The second guy did the final work, make the fiber ready for use.

The first guy
He started with opening the latch to the area between the floor and the ground, there is some space there to crouch. After this he opened up the stones in the street and dug a small hole to get the slack fiber from under the pavement.


There is about 10m slack available

A hole is drilled in the outside wall to bring the fiber in. The fiber is run through and the hole is filled with some kind of elastic glue.

The slack is fed into the crouching space and left there. The last two meter is pushed upwards into the utilities closet.


The first guy is then almost finished. He cleans up after himself, hammers the stones back in. Tells the second guy that he has chipped a stone and promises that it will be replaced. His final task is to leave a plastic bag with a connection set for the second guy. Good thing to know. If the first guy doesn't hammer the stones back in properly and I would complain later on, than he has to come back on his own dime and fix the problem. So he was committed to hammering the stones back into the pavement the right way. (In 5 years time those stones will hover above the rest of the pavement I expect :-) )All in all this took about 15-20 minutes.


The second guy
The second guy came about half an hour later. He told me that they had been told not to allow pictures as some of the stuff was proprietary and "copyrighted". He was a young guy and I don't want to bring him into trouble. It seems Arcadis checks up on their work and well. Arcadis developed an online model for the Ministery of Economic Affairs which you can use to calculate the costs of installing a fiber network in The Netherlands. I used it for the calculations in my OECD paper.

I did get some pictures of his kit and the way the fiber was installed. The install itself takes less then 15 minutes and is mostly aimed at getting various layers of the fibers and then connecting the fiber to the connectors (which come with fiber attached). That then is put into the metering closet in the grey cabinet.
The splicer! Very cool with a small LCD screen.
The whole shebang installed in my utility closet. Next to it you can see my Alice DSL modem.

The guy gave me some interesting information as well. An installer is required to do 11 installs per day. Homes like mine are easy. and they can do 20 of them on a good day. High Rise is difficult and takes more time. Older homes are also a pain. they sometimes need to drill straight from outside into the living room. A max of 6db signal loss is allowed. They try to do alot less, between 1 and 3. All in all the installation took only 15 minutes.

The line also needed to be tested. For this he used a unit by Kingfisher, pretty standard. What took the most time was getting someone on the phone at the central office. Those guys need to connect about 200 homes per day and they can be quite busy. There are 2 guys per central office. If someone finds a way in which the central office testing can be automated, that would be a great benefit. In my opinion. If you can get a testing unit to which you can hook up 500 to a thousand homes and have it communicate with the testing unit (or wirelessly to the guys mobile phone) that would be a major improvement to their workflow. Anything around 5 to 10 thousand euro would probably be worth the investment.

All in all this bit took another 15 minutes. 10 minutes for the waiting 5 for the testing.

Now I need to wait for KPN or Online to come up with a symmetrical offer for broadband to my home. Or shall I punish KPN and go for UPC for one year??

Bonus pictures
A picture of how Reggefiber promotes that people have signed up for fiber (glasvezel) in Zeewolde.

And some pictures of someone sitting in a tent in the street hooking up the fibers from individual homes to the main duct.

Email ThisBlogThis!Share to TwitterShare to FacebookShare to Pinterest
Labels: arcadis, Fiber to my Home, ftth, Reggefiber

Dilemma: Do I choose Reggefiber/KPN or UPC

Maybe you readers can react and give me a clue of what I should do, because I am in a difficult spot here.
Tomorrow Reggefiber will install the FTTH in my home. Pictures will follow. So in a month or two, I will be able to get KPN over fiber here. Now you would imagine me to go for the fiber offer. I have promoted it everywhere. I still think that fiber is the coolest thing to happen in a long while... However this is the choice I am facing.

So what should I choose? Go for a year of Docsis 3.0 and hope KPN gets the point or go with fiber even though it misses the sparkles.

Please give a reaction in the comments
Posted by Rudolf van der Berg at 23:45 7 comments: 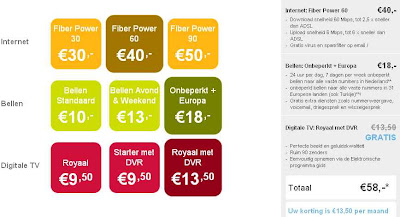 Well, UPC has declared war on KPN. It has drastically dropped its's prices as of today. As you might remember I named UPC as the price quality winner recently. Now it's for a similar offer also the cheaper option. The worst comparison is the 60/6 offer. KPN asks 110 euro for a 60/6 triple play offer. UPC asks 74 euro for a similar offer.  KPN offers free viewing of the Dutch football league, but UPC throws in free calling in Europe (including Turkey)

Based on head-line speeds, KPN has a problem both in the fibre space as in the DSL-space. The public won't understand an argument based on the difference between Ethernet and Docsis 3.0 when it comes to fibre. The headline speeds of ADSL2+ are lower and the price difference is not substantial to UPC's 30mbit offer. For instance Telfort, KPN's cheap brand asks 34,95 for 20mbit and unlimited national calling. UPC asks 48, but throws in a free digital tv and a PVR for those customers that already have analogue Cable TV with UPC (almost 90% of the potential subs in UPC's region)
Posted by Rudolf van der Berg at 11:07 No comments: